By sea and river and hills … 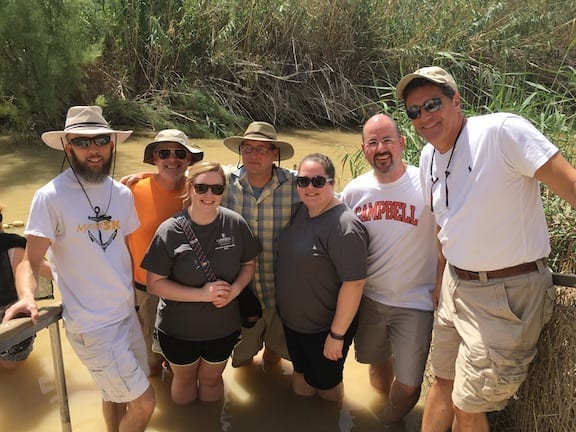 Thirteen travelers associated with Nurturing Faith Experiences and Campbell University Divinity School made their way from Jerusalem to Jezreel by a circuitous route on Sunday.

Cave Four at Qumran, where most of the Dead Sea Scrolls were found

We began the day by driving from Jerusalem down the Jericho Road to Qumran, where the Dead Sea Scrolls were found. In doing so, our altitude changed from about 2500 feet above sea level to nearly 1500 feet below. Qumram sits on a low hill adjacent to the Dead Sea, the lowest place on the face of the earth.

After visiting the site (and the gift shop), we traveled north to Qasr-el Yahud, a section of the Jordan River just across from Bethany Beyond the Jordan, where Jesus was baptized. Due to irrigation, very little water leaves the Sea of Galilee any more, so the Jordan is very small and largely polluted in its southern reaches.

Campbell folk brave the waters of the Jordan.

The site is particularly popular with Eastern, Russian, and Ukrainian Orthodox Christians. Few Protestants come there for baptism, though a brave crew from Campbell dared to risk their feet in the muddy waters.

From there we began a new adventure: instead of driving north through the Jordan Valley to Beth Shean and then on to Jezreel, we decided to turn left after a few miles and drive through the central mountains of Samaria so we could visit two important Old Testament sites there. The first was Mount Gerizim, across from Mount Ebal.

Mount Gerizim to the left, and Mount Ebal to the right, with the modern city of Nablus in between.

In biblical times, the city of Shechem was between the two mountains, and is associated with an bloody story in Genesis 34, in which the Israelites managed to make many enemies. Later, Deuteronomy 27 claims that Moses instructed the Israelites to stand, six tribes on one mountain and six on the other, and shout “Amen” as a list of prohibitions from the law were read.

Shechem gave way to the Roman city of Neapolis, which became the modern city of Nablus, the largest city in the Palestinian territories. On the top of Mount Gerizim there is both a Jewish settlement and a community of Samaritans, who consider themselves Jewish and follow their own version of the Pentateuch. Their worship still includes animal sacrifices during Passover: we drove by the place where animals are ritually slaughtered and burned (unfortunately, too quickly for my shutter finger).

The sharp concentration of buildings in Nablus is the Balata refugee camp.

From Mount Gerizim we could look down at a large church built over Jacob’s Well and the nearby Balata Camp, where more than 27,000 Palestinian refugees live. The camp was designed to temporarily house 5,000 refugees who lost their lands to Israel in 1948, but it swelled to become the largest refugee camp in the territories, and far from temporary.

We drove by the poorly preserved remains of Tel Balata, ancient Shechem, but decided not to stop. We then drove on to Sebastia, the Roman name for Samaria, the capital city of ancient Israel, reportedly built by King Omri.

The highest point of the tel at Sebastia offers a great view — but consists of dirt piled up from earlier excavations, many of which were back-filled and no longer visible.

We enjoyed a nice lunch of chicken maqlooba before touring the site, which turned out to be very poorly marked. Though it contains a nicely built Greek-style theater and the foundation platform of a large temple to Augustus from the Hellenistic period, remains from the Old Testament are unmarked and basically invisible to the untrained eye.

After a small delay at the border, we drove to Jezreel by a roundabout route, arriving in time to find our rooms before a nice dinner of shakshuka, a dish made mainly of chunky tomato sauce with eggs cracked open and baked into it.

The Central Hill Country of Samaria, looking east. The first identifiably Israelite villages were in this area.

I couldn’t read the labels, which were in modern Hebrew script, and mistakenly took a big serving of a very hot version, which singed my sinuses before I could drink some water.

We enjoyed an orientation lecture about the significance of Jezreel and a history of the dig after dinner. The next day began before sunrise with an orientation walk and our first day of digging — but that story will have to wait.