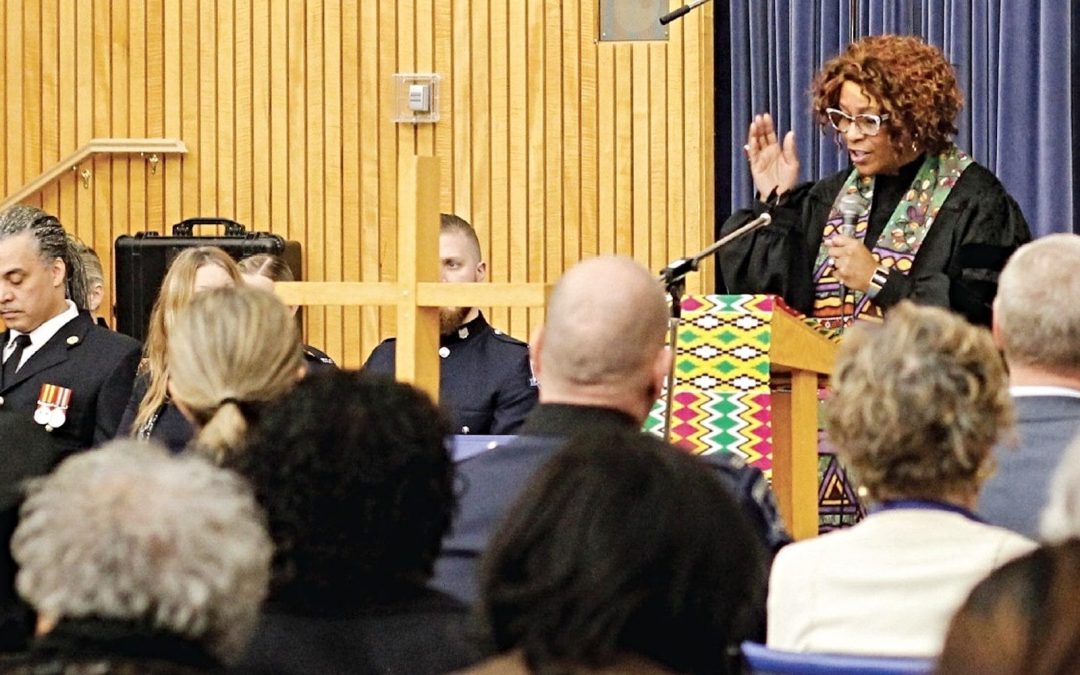 The message was clear: The church was taking a bold stand against injustice by severing ties with the street’s controversial name.

Located on the west side of Cornwallis Street, the predominately African Canadian church was named for its geographical location.

Like other public sites across the city – such as parks, schools, monuments and rivers – the street itself was named in honor of Edward Cornwallis, the British military officer who founded Halifax in 1749.

But in recent years, Cornwallis’ legacy has been the subject of heated debates across the city.

While some laud him as a public hero, others say he is responsible for a form of genocide against the Mi’kmaq people.

Four months prior to the church’s announcement, a statue of Cornwallis was removed from a Halifax park after years of advocacy to take it down.

“The intent of the name change is to identify ourselves by a name that better reflects the church’s values with an eye to the church’s work in the future,” Rhonda Britton, senior pastor of New Horizons, said in a press release. “The change also supports our First Nations sisters and brothers in their continued efforts to educate the public regarding the violence and mistreatment they have endured.”

When Britton began working at the church in 2007, she met with Daniel Paul, a Mi’kmaq elder and author at the forefront of a growing movement to remove Cornwallis’ name from city monuments. At the time, he was circulating a petition to change the name of Cornwallis Street.

Along with another colleague, he told Britton about the atrocities faced by indigenous people under Cornwallis’ authority.

In the same year he founded Halifax, Cornwallis issued a monetary reward for Mi’kmaq scalps. This incentive spurred brutal attacks on Mi’kmaq villages, claiming the lives of men, women and children.

“I had never heard of Cornwallis,” said Britton, a Florida native who was new to Nova Scotia at the time. But after learning the history, the church agreed to sign the petition to change the name of the street.

If approved, congregants knew they would have to consider a name change as well. “We were fine with that,” Britton said. “But the city never changed the name of the street.”

Although they couldn’t control the outcome from the city, members of the church still wanted to show their support for the Mi’kmaq community.

After careful consideration and discussion, the congregation voted in favor of changing its long-held name and began the journey toward redefining the church’s ministry.

“[The congregation] recognized that in cases of oppression, we have this in common with our First Nations brothers and sisters,” Britton said. “We can’t change what happened in the past, but we can decide what we want to celebrate in history.”

Established in 1832, the church was founded by Rev. Richard Preston, the son of a slave who came to Nova Scotia from Virginia.

Originally known as the African Baptist Church, it provided an alternative place of worship for African Canadians facing restrictions and discrimination in other churches.

About 60 years later, the church was incorporated as Cornwallis Street Baptist Church after a renovation brought the building closer to the street.

Under this name, the church later became the place of worship for Viola Desmond, a Canadian businesswoman who challenged racial segregation at a Nova Scotian theater in 1946.

Often compared to Rosa Parks, a U.S. civil rights activist in the 1950s, Viola was recently commemorated on $10 Canadian banknotes.

“Our church was founded out of racism, so the people who decided to step out and start their own church were doing a new thing. They had a new vision for whom they could be as people working in the kingdom of God. For them, this was a new horizon,” Britton explained in an interview with Global News Halifax. “So, we kind of picked up on that [unknowingly]. God still has a lot more work for us to do.”

Today, New Horizons is a thriving body of believers known for its community involvement.

As an urban church located near public housing, congregants help provide essentials like food and clothing to those in need.

They also lead community outreach events, organize rallies and partner with city agencies to address poverty, violence and social injustice in the area.

For Britton, building the church starts within the hearts of its people. “It’s part of our call to be a people who are reconciled, forgiving and forbearing. That has to be modeled in the church,” Britton said.

“You can’t be one way inside these walls and be a different way outside these walls. I think it’s a great testament to what we are supposed to be in the kingdom, and it’s a reminder that the kingdom is every nation, tongue, tribe and people. We have to exemplify that every day.”

Through an annual service to mark the International Day for the Elimination of Racial Discrimination, the church works to promote racial unity within their neighborhood.

Local leaders, including the mayor and the city’s police chief, have attended the popular service. In recent years, uniformed police officers have also participated in the church’s choir to show their solidarity and support.

As pastor of the church for the past 12 years, Britton has partnered with Mi’kmaq leaders on various community initiatives.

Through these interactions, she became more aware of how the name of the church was affecting its witness to the community.

“We would be talking about justice, but we bore the name of one who oppressed our brothers and sisters,” Britton recalled. “And even though we were named after the street – not the person – that hardly matters to people who have been harmed.”

When the church first announced its new name to the public, it prompted an outpouring of appreciation from members of the Mi’kmaq community.

Britton received calls, emails and letters from people who were touched by the church’s efforts to promote healing and reconciliation.

“I think people recognize that it wasn’t just a name change. It was a very solid part of our history. We had been known by that name since 1892. It is very much a testament to our growth,” the pastor said. “When we do something like this, it exemplifies to the world that we are not just talkers.”

Paul, the Mi’kmaq elder, was thrilled to learn of the church’s decision. “I salute my brothers and sisters in the black community for making my day and traveling in fellowship with our people.”

Although the church’s street address remains the same, a sign outside that reads “New Horizons Baptist Church” is evidence that the work of building the church has started from the inside out.

Now, the congregation is ready to take on its next challenge: constructing a new church building.

Editor’s note: A version of this article first appeared in the Spring 2019 edition of Mosaic Magazine, a publication of Canadian Baptist Ministries.

Nicolette Beharie serves as the editor of Mosaic, a publication of Canadian Baptist Ministries. With more than 14 years of journalism experience, Beharie is an award-winning reporter who specializes in magazine editing and feature writing.