Climate Change Accord: Another Unfulfilled Promise?

Is the Paris climate agreement an offer of “jam tomorrow,” to quote the White Queen’s offer in “Alice in Wonderland”?

COP 21 sought to build on the agreement of the COP 17 “Durban Platform” adopted in 2011, which called for a legally binding international treaty in 2015 to reduce greenhouse gas emissions and the establishment of the Green Climate Fund to deliver finance and technology to developing countries for clean energy economies.

COP 21 also recognized the need to protect human rights and ecosystems, to safeguard food security and to manage the world forests in a sustainable way.

The climate agreement seeks to hold global warming below 2 degree Celsius above pre-Industrial levels, to increase the ability of countries to adapt to climate change and to pursue transformation toward sustainable development.

The Paris meeting demonstrated a growing awareness that the world’s least developed countries face the greatest threat from climate change as their infrastructure is too fragile to cope with extremes of weather.

The science is unequivocal and all delegates accepted that the situation the world faces is urgent – 2014 was the warmest year on record and 2015 has been warmer.

The concentration of CO2 in the atmosphere has exceeded 400 parts per million, and the average global temperature has risen to 1.01 degrees Celsius above the pre-Industrial temperature. The impact of this change is seen around the world.

There have been high hopes expressed in the lead-up to and during the discussions in Paris, and there is no doubting the historic first step that the final agreement by 195 countries represents to stave off the worst effects of catastrophic global warming.

It is the culmination of more than 20 years of U.N. climate talks and has seen all countries agree to reduce emissions, promise to raise $100 billion a year by 2020 to help poor countries adapt their economies, and accept a zero emissions target by later this century.

Economist Lord Nicholas Stern called it “a historic moment, not just for us but for our children, our grandchildren and future generations.”

Others are less optimistic due to the predominance in the agreement of vague words – “resolves,” “recognizes,” “urges,” “emphasizes,” “affirms,” “takes account of” – all of which lack a legally binding commitment.

But then we may ask, could any global agreement be legally enforceable?

While global nations have made commitments to address climate change, current commitments would result in a 2.7 degree Celsius rise by 2100 with accompanying significant and dangerous climate impacts.

Therefore, the COP21 agreement calls for a review of commitments and progress every five years.

A broader commitment to support the Green Climate Fund to aid adaptation to climate change for poorer nations was also made in Paris, with a more transparent review process.

The recognition of the importance of justice in the negotiations and their implementation has been refreshing.

However, there has been disappointment expressed at the perceived hypocrisy in the Western government’s approach to reducing its greenhouse gas emissions due to a utilitarian ethic focused on greatest benefit for the greatest number that only considers national, not global, benefits.

He called for technology to be used in the service of all humanity, urging politicians to hear the cry of the earth and the cry of the poor – an appeal to virtue ethics with the recovery of Christian values and goals and a call to an ecological conversion whereby an encounter with Christ is evident in our relationship with the world around us.

As Christians, we worship God who created the universe and pronounced that it was good (Genesis 1) and is in a covenant relationship with the whole of creation (Genesis 9).

Empowered by the Holy Spirit, God’s presence in all creation, our role is to become truly Christ-like, the first fruits of the Spirit, as creation awaits complete redemption (Romans 8:18-25).

We live with broken relationships (Genesis 3) in a world fractured by human rebellion, which seeks the power, control and wealth that belongs to God (Genesis 3:5).

But we also live with the ultimate hope of God’s promises and purposes. God will finally renew the whole of creation (Revelation 21:1-4) and destroy those who lust after power and wealth (Revelation 19).

We are accountable to God and are called to follow Christ (Mark 8:34) in his mission in and for the world.

We are called to a life of self-sacrificial concern for the world and its people, and to worship God through humility, justice and merciful action (Micah 6:8).

The COP21 agreement reveals a growing movement of people involved in campaigning for greater, fairer and more ambitious action on climate change.

Christians have a central role in many countries in these movements, keeping their governments accountable and pushing for more and better action both domestically and internationally.

As good citizens, we seek to witness to God’s concern for the whole of creation now and hold governments to account, always conscious of the world we leave for those who come after us – “jam yesterday, today and tomorrow.”

John Weaver is the chairman of the John Ray Initiative (JRI), an educational charity focused on connecting environment, science and Christianity in the United Kingdom. He was principal of South Wales Baptist College until his retirement in 2011 and served as the president of the Baptist Union of Great Britain in 2008-09. A longer version of this article first appeared on the website of The Kirby Laing Institute for Christian Ethics. It is used with permission. His writings also appear on the JRI blog.

Editor’s note: EthicsDaily.com contributing editor Brian Kaylor was in Paris for the COP21 United Nation’s climate change conference. Pictures and videos from his trip can be viewed here. His news stories on the conference are available here. 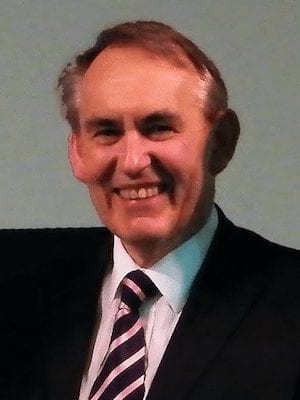 Vice president of the John Ray Initiative (JRI), an educational charity focused on connecting environment, science and Christianity in the United Kingdom. Weaver was principal of South Wales Baptist College until his retirement in 2011 and served as the president of the Baptist Union of Great Britain in 2008-09.