Death, Taxes and a Surprising Find

Ongoing excavations at Arnona, just south of Jerusalem. Authorities plan to preserve the site even as a housing complex is built around it. (Photo: Yaniv Berman, Israel Antiquities Authority)

Taxes have been around since the emergence of urban civilization but weren’t always paid in coinage, checks or bank drafts.

Many ancient Hebrews paid their taxes in the form of grain, wine or olive oil, which were then stored in large pottery jars, typically holding about 12 gallons each.

The jars, used for both storage and distribution, were marked with a stamp on the handle indicating the goods were property of the royal administration.

Why bring this up? Because the Israel Antiquities Authority reported last week that archaeologists conducting a salvage dig ahead of a new housing development in Jerusalem’s Arnona neighborhood had uncovered an administrative complex dating from the late eighth into the seventh centuries BCE – when Hezekiah and his son Manasseh ruled the kingdom of Judah.

It’s possible the complex originated as part of Hezekiah’s effort to store and distribute resources in the face of impending attacks by Sennacherib, who invaded Judah and destroyed many cities in 701 BCE.

The unusual structure featured concentric circles with walls of nicely dressed stones. The complex probably served to collect, store and distribute taxes paid by farmers in the surrounding fields, where olive orchards and vineyards would have been plentiful.

Aside from the exceptional architecture of the building, archaeologists have so far uncovered 120 stamped jar handles. Most of them contain the well-known symbol of a two-winged sun disk and the Hebrew inscription lamelek (LMLK), which means “belonging to the king.” 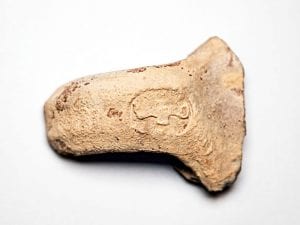 ‘To the King’ – two-winged seal impression.

More than 2,000 similar jar handles have been found across Judah, but they are rarely so concentrated. A similar assemblage was found at the nearby site of Ramath Rachel, a larger administrative center.

More than a dozen jar handles bore seals with the names of individuals, who must have been either wealthy individuals or high-ranking officials.

Some may find it surprising that much of ancient Judah’s administrative activity took place outside of the city walls. Both Arnona and Ramath Rachel are about 1.2 miles south of the Old City. Jerusalem sprawls over about 48 square miles today, but had suburbs in ancient times too.

The site was abandoned when Jerusalem was destroyed by the Babylonians in 586 BCE, but later resumed operations, continuing well into the Persian period.

At some point, though, the complex was covered by a pile of rocks covering nearly two acres and reaching 60 feet in height.

That’s a lot of rocks. Archaeologists are mystified as to why anyone would go to so much trouble to obliterate a tax office. Were angry farmers taking out their frustrations by stoning the place and turning it into a rock pile when they cleared new fields?

The real reason remains a puzzle, but we can be sure of something. As Benjamin Franklin said in 1798, cribbing an earlier aphorism from Christopher Bullock, “Our new Constitution is now established, and has an appearance that promises permanency; but in this world nothing can be said to be certain, except death and taxes.”