Do You Rest on Former Endeavors or Live in Present?

I am in my early 70s and those “formers” tell a lot about who I was – former-ly. As I age, if that is what life holds for me, there will be other “formers” that will join that list.

I want to make clear that most of those “formers” do not relate to my age, but to the fact that I served the term to which I agreed on the front end. But the language does have more significance to me as I get older.

I have noticed that as the years pass by, each one takes its toll. In my “former” days, I could last longer, hit the high notes more easily and especially recuperate more quickly.

There are a lot of things that I still do that enrich my life and nourish me spiritually, mentally and physically.

In addition, I am blessed by the love of my husband, children and granddaughters. So I am grateful that as the list of “formers” grows, I remain in the present tense.

Although I will never be younger, I can be engaged in what God has put in my hands to do right now, even though my hands are neither as strong nor as capable as they used to be.

As a teenager, I was often present in “say so” meetings, both in the private Christian school I attended and at Bible conferences, based on the verse in Psalm 107:2, “Let the redeemed of the Lord say so.”

Sometimes, the predominant testimonies were of what God had done in the person’s life at some prior time; they were testimonies of “former” blessings.

It was always more meaningful, at least to me, when folks shared what God was doing in their life in the present.

I think we are all often guilty of looking and thinking too much about the “former” things, instead of following Paul’s example of “pressing on” (Philippians 3:14) to what lies ahead.

If our concentration is only on the “formers,” we’ll miss the here and now, not to mention what is still to come.

Some days will be full of sunshine and others will be cloudy or stormy, but God’s Spirit goes with us through each of them, encouraging, sustaining, convicting and guiding.

Each day should be a commitment to who we are and what we are called to do.

Sara Powell is a freelance writer, former board member of the Baptist Center for Ethics and former moderator of the Cooperative Baptist Fellowship of Georgia. She and her husband, Bill, live in Hartwell, Ga. Visit her website at LiftYourHeart.com. 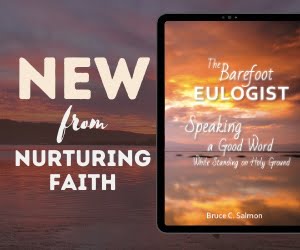