Does Another Option Exist to Handle North Korea?

The United States ambassador to the United Nations believes that the organization is out of options with regard to North Korea.

“U.S. Ambassador to the U.N. Nikki Haley said on Sunday that the U.N. Security Council has run out of options on containing North Korea’s nuclear program and the United States may have to turn the matter over to the Pentagon,” Reuters reported.

We have heard repeatedly that the U.S. believes North Korea must not have nuclear weapons and must desist from developing them.

Exactly why the U.S., with its own massive nuclear arsenal and the only country on earth that has ever actually used such a weapon in war, has the right to decide who should and who should not have such weapons is itself unclear.

But my interest here is in the possibility of a different approach altogether. We might call it peacemaking.

On Sept. 18, for example, letter-writer Maggie Morgan stated, “It’s ironic that the nations most at risk from North Korea (Japan, China and South Korea) are sensibly taking the softly-softly approach. Meanwhile, the U.S. who has the least at risk, is screaming the loudest and putting the entire region at risk, including Australia.”

This comment reminds me of a lively interchange between Reinhold Niebuhr and Karl Barth, the former living in the U.S. and the latter in Switzerland.

Niebuhr attacked Barth for not speaking out more loudly against the Soviet Union in the 1950s. Barth observed that the approach needed to be different from where he was placed as a neighbor.

What would it mean to live with North Korea, rather than to threaten them?

Another letter in “The Age” by Reg Murray stated, “North Korea is in the nuclear club to stay. It is quite likely that if the Americans and South Koreans were to offer to stop their own sabre-rattling in the form of regular missile tests and military exercises that Kim would also be happy to forgo his missile tests.”

On a recent radio program, I heard a U.S. commentator observe that this current situation is actually in stark contrast to the Bay of Pigs crisis over Cuba.

At that time, the military chiefs were all for an immediate attack, while President John Kennedy was the one who urged them to stay their hands in the hope of some kind of settlement.

We have all lived to be thankful that he was right. By contrast, it is reported that in the current situation, the military chiefs are those urging to hold off, while U.S. President Donald Trump is keen to deliver “fire and fury.”

There is yet another way. A hint of it is found in another newspaper letter offered several weeks ago.

Danny Cole wrote, “I can see the response from the U.N. if North Korea delivers a nuclear warhead to an inhabited target (Japan, Guam, Anchorage, Darwin?). The Security Council ‘condemns in the most serious terms this latest breach of UN resolutions by North Korea.’ The US will proclaim that ‘fire and fury” will be visited upon North Korea. Julie Bishop will echo the US and add ‘Australia stands ready to commit diplomatic and military resources to support the US in any action against North Korea.'”

He continued, “Threatening fire and fury won’t stop Kim. He knows that empty rhetoric too well. Wouldn’t it be a lot better if the rest of the world bombarded North Korea with food parcels, clothing, whitegoods, wide screen TVs, furnishings and mobile telephones? Surely makes more sense than pushing a demagogue further toward nuclear destruction?”

In other words, what if we loved our enemy?

Jesus suggested this is the only way. “You have heard that it was said, ‘Love your neighbor and hate your enemy.’ But I tell you, love your enemies and pray for those who persecute you, that you may be children of your Father in heaven” (Matthew 5:43-47).

There has to be another way – as Walter Wink called it, “Jesus’ Third Way.”

It is surely worth a try.

Frank Rees is a Baptist pastor in Melbourne, Australia, and an associate professor in the University of Divinity. A version of this article first appeared on his blog, To Be Frank, and is used with permission. You can follow him on Twitter @frankrees. 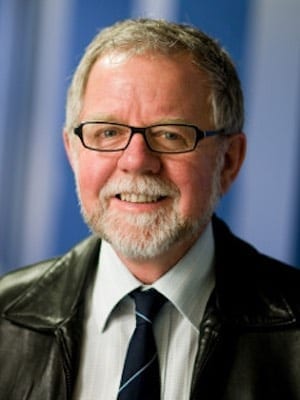 A Baptist pastor in Melbourne, Australia, and an associate professor in the University of Divinity.