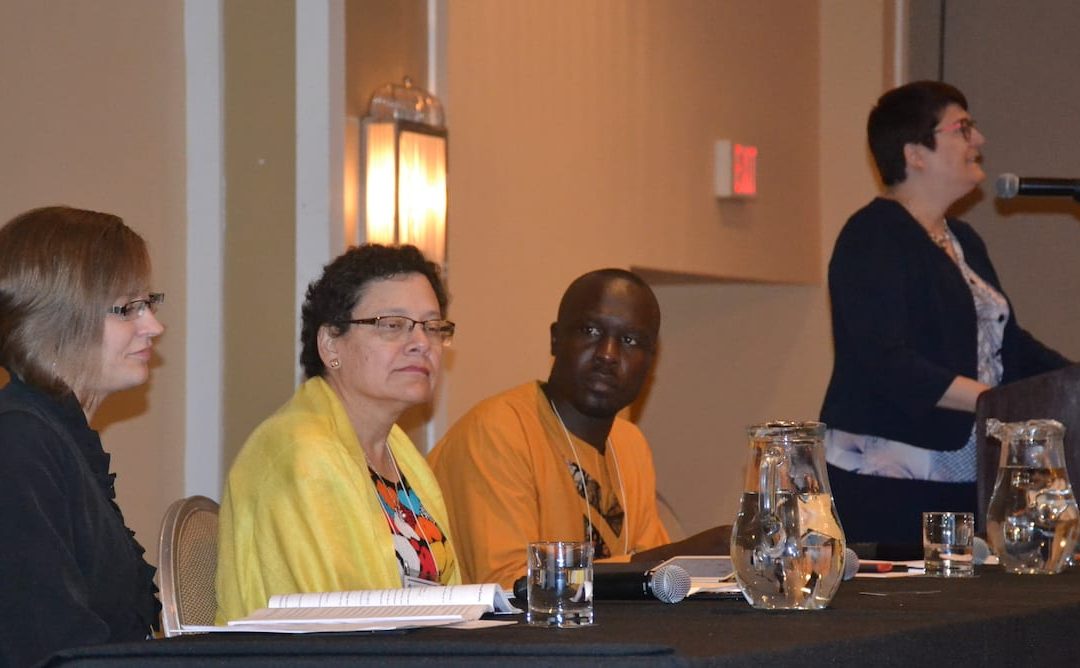 The second day of the Baptist International Conference on Theological Education got underway with a stirring paper by Valérie Duval-Poujol of France on the subject of “Bible Translations and How They Have Affected Women’s Engagement in the Church and Society.”

Duval-Poujol noted the rapid rise in the number of biblical translations available and the ongoing concern about the need to translate without sexist bias. For most of history, men alone have done the work of translation, with the result that patriarchal culture and gender bias have naturally found their way into the translations. Only recently have more women been included on translation teams.

Duval-Poujol offered a series of texts that are often translated inaccurately, leading to sexist understandings that put women in a subordinate position. For example, the failure to appreciate the richness of ezer kenegdo in Gen. 2:18 has led many to think woman was created only as a “helper” to the man in the sense of a housekeeper and child-raiser, she noted, and the word ‘ezer rightly describes help beyond the abilities of someone, often in the sense of rescue or salvation. It is most commonly used of what God does to assist humans. The word kenegdo means “as across from” or “face to face” and implies communication suggesting an equality of relationships as God’s intention.

Among examples cited from the New Testament, she noted that the word ‘anthropos can be used in the sense of “person” or “human,” but is often translated as “man” to imply gender when it was not intended. An example is 2 Timothy 3:17, often translated as “so the man of God may be thoroughly equipped for every good work,” when it is more properly rendered to indicate that scripture equips all persons to do God’s work.

Duval-Poujol also pointed to sexist “peritexts” in some translations, with “peritext” describing editorial titles or verse divisions that influence the interpretation of a text. For example, Eph. 5:22 is often set apart as a new section headed by a title “Duties of a Christian wife” and translated as “wives submit to your husbands,” even though it requires the addition of the verb “submit” (not in the text) and breaking apart a single sentence in Greek — one that emphasizes mutual submission between husbands and wives.

Duval-Poujal called for Baptists to encourage more women to train and be involved in Bible translation and theology; to encourage pastors, teachers, and translators to make women more visible in their teaching or translating; and to encourage places of debate, such as BICTE, where such issues can be discussed.

Valerie Duval-Poujol speaks as responders Melody Maxwell of the USA and Canada, Dinora Mendez of Mexico, and Kilama Dennis of Uganda listen.

In a response, Melody Maxwell of the USA and Canada noted that we should appreciate that the English language has changed over time, so we shouldn’t be too hard on translators who used “man” 100 years ago when the first dictionary definition of the word was “humankind,” and the specificity of “adult human male” was the fifth option (citing the Concise Oxford Dictionary of 1919). Still, as language changes — today “adult male” would be the first definition of “man” according to a contemporary dictionary — we should use more appropriate language in modern translations.

Dinorah Mendez of Mexico responded with many examples of similar language issues from Spanish translations, using the same texts that Duval-Poujal had used.

Kilama Dennis of Uganda spoke to translations into four different African languages, and said most of them heavily emphasize men to the exclusion of women. This suggests a need for new translations with revised presuppositions that include women in the work and in the translation. He pointed to particular issues in Africa, where women make up the most active part of the church, but live in a culture entirely dominated by men. “The Bible is not the problem,” he said. “We are the problem.”

Two more plenary sessions are to be held on Saturday, and two more on Sunday. I will not be summarizing all of these here. Persons who are interested can watch the sessions live or in recorded form through the Baptist World Alliance channel on YouTube. Viewers can even participate live through a chat format by using this link: youtube.com/c/baptistworldalliance. Plenary lectures are also available at no cost by downloading a PDF of the conference book http://bit.ly/BICTEBook.