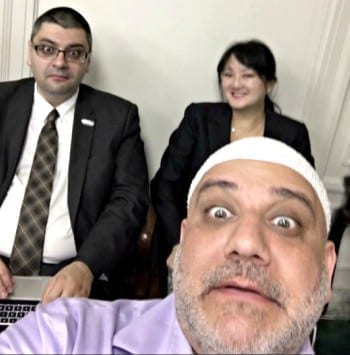 I wasn’t surprised, since some of the legislators from the same House sponsored anti-sharia law State Question 755 a few years prior.

Bennett, a well-known “Islamophobe,” called Islam “a cancer” and advocated for the demolition of mosques around Oklahoma City.

The interfaith community, CAIR-Oklahoma’s Executive Director Adam Soltani and I decided to attend the interim hearing.

We hoped and prayed Bennett would mention the domestic hate groups that have been growing in our state.

Surely, he knows the Alfred Murrah building bombing was perpetrated by homegrown terrorists. Surely, he is aware Oklahoma hate groups have surged to their all-time high.

To my surprise, there was not one mention of any domestic radical group in Oklahoma. The entire hearing was about Islam, Muslims and every Muslim institution in the state.

I sat and watched in horror as he mentioned reputable local and national Muslim organizations and designated them as terrorist organizations.

I sat in terror as he displayed photos of every mosque in Oklahoma City along with pictures of Adam and me.

He turned his face toward us, looked us straight in the eyes and pointed us out as the biggest terrorists in the state.

Bennett stated, “If you love America and love freedom and our way of life, you have an obligation to stand and fight against Hamas, CAIR (the Council on American Islamic Relations), NAIT (the North Atlantic Islamic Trust) and ISNA (the Islamic Society of North America) and all these other groups that are here to destroy us. … We’re going to do all we can to kick these terrorist organizations out of the state of Oklahoma and do whatever it takes to protect our citizens.”

To be quite honest, none of this fazed me. As a matter of fact, I took a selfie of Adam and me as we posed in a sarcastically surprised manner.

What really made me lose my temper was the moment he pointed at the interfaith community that came for no other reason but to stand in solidarity with us.

He pointed at them as he said they are all complicit and are all accomplices to terrorism.

At that point, I did what any “terrorist” would do: I got up and started hugging the members of the interfaith community.

I remember very vividly that I hugged William Tabbernee, the executive director of the Oklahoma Conference of Churches, who represents 600,000 members in the state, along with Rabbi Vered Harris of Temple B’nai Israel, who was almost in tears from the accusations.

These actions seemed to annoy and confuse Bennett.

On January 2017, Oklahoma Representative Jason Dunnington (D-Oklahoma) invited me to apply to be a House “Chaplain of the Day.”

Having done that before in state and city governments, I saw the invitation as a way to mend what Bennett had done. I’m sure Dunnington had similar intentions.

I promptly filled out the paperwork, submitted the application and waited eagerly for that promised day. Months went by, and I did not receive any news regarding my application.

Upon checking in May 2017, I was stunned to learn my application was denied by Oklahoma Representative Chuck Strohm (R-Jenks). Dunnington also informed me that he tried to receive an explanation from Strohm.

The explanation Strohm offered was that, somehow, I’m a terrorist. He was referring to the hearing in October 2016 when Bennett tried, convicted, declared guilty and sentenced to isolation me as well as Muslims across the U.S. without allowing any of us to testify.

Since May, I have been trying to speak with Strohm. I have visited with almost all interfaith leaders in the community who have all tried to contact Strohm and the Speaker of the House to no avail.

I was advised by many attorneys to file a litigation. I refused.

My refusal was due to a deep sense of love to my country, to my state, to my city.

My refusal was because I will not be the one responsible for shutting down the chaplaincy program for the House of Representatives.

In February 2018, I was informed of a new rule offered by none other than Strohm who, later on, I realized is a close friend of Bennett’s.

The rule states, “We do ask that the Chaplain be from the Representative’s own place of worship.”

I immediately called various leaders in minority religions to find out if they have any representation in the House of Representatives. Of course, there was none.

This rule discriminates against every single religion other than the majority religion (Christianity).

It is no longer about me. It is about every minority religion in Oklahoma – and that is why I decided to go public with my story.

I believe Strohm carried on the sentence handed out by Bennett by trying, convicting, declaring guilty and sentencing the interfaith community as Bennett promised to do through isolation from the people’s House of Representatives.

In his own words, Strohm said, “The Chaplain program is not a platform for personal agendas but an opportunity to ask for God’s wisdom.” I ask the representative to practice what he preached.

Moving forward, many scenarios could come into play.

If Strohm opens the door for dialogue with the interfaith community, as we repeatedly asked him to, and changes this policy that discriminates against minority religions, the problem will be solved immediately.

The interfaith community might even offer an honorary membership to some of these legislators to temporarily combat this policy.

If he continues refusing to respond to our requests, pressure will be put on him via mail, media and action alerts.

At that point, we will ask everyone to participate who loves our country, values our First Amendment and its protection of freedom of religion for all faiths.

If he continues to ignore us, the matter may be forced to go to litigation. I am very optimistic it will not go that far, but judging from State Question 755, some legislators would use public money, cost the state thousands of dollars, lose in federal court and still declare a political victory among some of their constituents simply because they put politics over ethics.

Let’s do the right thing, Oklahoma, because hate is not OK.

Imad Enchassi is imam of the Islamic Society of Greater Oklahoma City. He was an interviewee in EthicsDaily.com’s 2010 documentary, “Different Books, Common Word: Baptists and Muslims.” 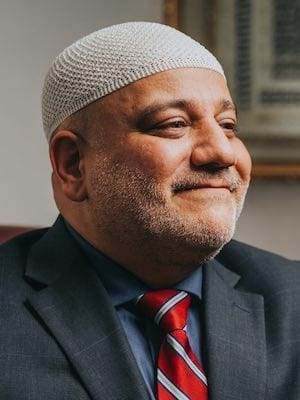 Imam of the Islamic Society of Greater Oklahoma City. Enchassi is featured in “Mercy,” a 2018 short-documentary from EthicsDaily.com, and he was an interviewee in EthicsDaily’s 2010 documentary, “Different Books, Common Word: Baptists and Muslims.”