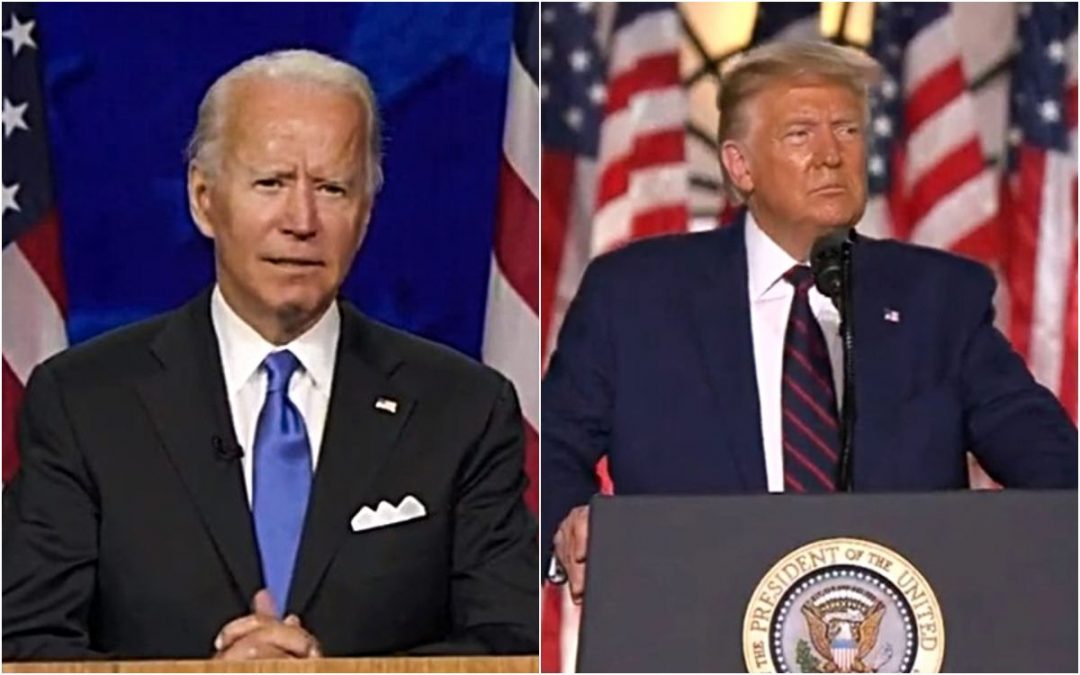 Joe Biden and Donald Trump are both men of professed religious faith, which showed at this year’s national conventions.

While the theme of religion was woven deeply into both party platforms, the similarities began and ended at the cliché of “God Bless America.”

The Democratic National Convention appealed to Christians and non-Christian people of faith on the grounds of morality and social justice.

The conventions made it clear we have two very different Christianities operating in America.

The 72% of white evangelical Protestants approving of Trump stands in stark contrast to the 74-83% disapproval rating he receives from Black protestants, Hispanic Catholics and religiously unaffiliated, according to the Pew Research Center.

A video of Americans reading the Constitution opened the DNC, focusing on the theme of “We the People” with a diverse speaker lineup.

“[Joe Biden] will be a president for Americans of all faiths, as well as people of conscience who practice no particular faith,” said Delaware Sen. Chris Coons, a Yale Divinity School graduate.

The RNC opened with a video with all sorts of Americans as well, but President Trump was the star, portrayed as the “true leader” of America.

For the most part, the prayers at both conventions centered on light.

In Rev. Gabriel Salguero’s invocation at the DNC, he asked God to give us hearts of compassion and grace to guide us to live humbly and seek justice, echoing Micah 6:8.

At the RNC, Rev. Norma Urrabazo prayed, “Lord, we come before you to ask for your spirit of peace to come over hurting communities in Wisconsin tonight. We pray for healing and comfort to Jacob Blake and his family.”

In a moment of bipartisanship, almost nonexistent at either convention, Cardinal Timothy Dolan prayed, “We ask your hand, Almighty Father, upon this convention and the nominees of both parties.”

Almost every speaker at the DNC emphasized the upstanding character and faith of Joe Biden.

Most notably, Jill Biden spoke of her husband’s loving leadership and resolute determination after the death of his son, Beau.

“Joe’s purpose has always driven him forward. His strength of will is unstoppable, and his faith is unshakable,” she said.

Others spoke of their personal experience with Biden’s faithfulness, like Mayor Pete Buttigieg, who said he had seen up close the empathy and capacity of Biden and Harris.

Sen. Coons said, “Joe knows the power of prayer, and I’ve seen him in moments of joy and triumph, of loss and despair, turn to God for strength.”

Former President Jimmy Carter, along with others, insisted Biden was the candidate to bring people together, to unite America and to care for all of its citizen regardless of their differences.

RNC messages focused on fear more than hope. Speakers emphasized the “Christian” way of life, U.S. democracy and Western civilization are under threat, portraying Donald Trump as the savior.

The consistent “us vs. them” rhetoric continued to rile up fear of the other. The media, protestors, “cancel culture” and socialists are all coming after the American way of life, and you should be afraid. That was the Republican message.

“This election will decide whether we protect law-abiding Americans, or whether we give free reign to violent anarchic agitators and criminals who threaten our citizens,” Trump said. “They are coming after me because I am fighting for you.”

The recent protests advocating for racial justice received attention at both conventions, but in very different manners.

DNC speakers spoke out against police brutality. Former President Barak Obama said, “Americans of all races are joining together to declare, in the face of injustice and brutality at the hands of the state, that Black lives matter, no more, but no less, so that no child in this country feels the continuing sting of racism.”

Vice President Mike Pence called for an end to violent protests. Those who tear down statues should be “prosecuted to the fullest extent of the law,” he said, emphasizing we will have law and order on the streets.

“You won’t be safe in Joe Biden’s America,” Pence said. “Under President Trump, we will stand with those who stand on the thin blue line, and we’re not going to defund the police – not now, not ever.” His speech came a few days after Kenosha police shot Jacob Blake seven times in the back.

The emphasis on fear and the conflation of Christianity with American symbols was disappointing.

Conservative activists, politicians and citizens spoke for “Christians” in a way that was out of line with the belief system of many Christians in America.

Trump’s morality was not a key point of discussion at the RNC. Some of his convention speakers even joked about his Twitter presence, including First Lady Melania Trump, who said, “Whether you like it or not, you always know what he is thinking.”

Many conservative Christian voters cling to the Republican Party based on one issue: abortion.

A Roman Catholic nun called Trump “the most pro-life president that this nation has ever had.”

No matter his other shortcomings, the RNC ensured its voters that Trump stands with them on this one issue, despite Trump expressing pro-choice views in the past.

As Christians, our personal beliefs hold value in our vote, and it is time to ask ourselves some hard questions.

Is one policy issue worth defending numerous other despicable actions? Do we want to live in a state of fear or a world full of love and light?

A North Carolina native with degrees from the University of North Carolina (BA in English and Psychology) and Campbell University Divinity School (MDiv), Gordon currently works with youth, college students and young adults at a church in Raleigh, North Carolina. She is currently an Ernest C. Hynds Intern at Good Faith Media.