The Rough Realities of New Faith

3And he told them many things in parables, saying: ‘Listen! A sower went out to sow. 4And as he sowed, some seeds fell on the path, and the birds came and ate them up. 5Other seeds fell on rocky ground, where they did not have much soil, and they sprang up quickly, since they had no depth of soil.

18 ‘Hear then the parable of the sower. 19When anyone hears the word of the kingdom and does not understand it, the evil one comes and snatches away what is sown in the heart; this is what was sown on the path. 20As for what was sown on rocky ground, this is the one who hears the word and immediately receives it with joy; 21yet such a person has no root, but endures only for a while, and when trouble or persecution arises on account of the word, that person immediately falls away.*

News reports have exposed what appears to have been a scheme by organizations associated with the media empire controlled by Rupert Murdoch to invade the privacy of countless people by hacking their phones and email accounts.  We live in a troubled world.

In the United States, time is running out for national leaders to decide whether to increase the amount the nation can borrow.  Some of the leaders seem willing to do so only if social programs that serve the elderly and provide health benefits to poor people are drastically cut.  We live in a troubled world.

Everyday people are struggling to cope with aging bodies, rising costs, a heat wave, paying for food, clothing, and shelter, getting along with their relatives and neighbors, and a lot more.  We live in a troubled world.

And Jesus explained in the parable of the sower that God’s grace and truth is revealed—planted—in the lives of people who face these and other rough realities.  Jesus explained that God’s grace and truth takes root and shows up in the lives of people facing rough realities.  Jesus described it this way at Matthew 13:5?  Other seeds fell on rocky ground, where they did not have much soil, and they sprang up quickly, since they had no depth of soil.

Later Jesus explained what he meant in these words:  As for what was sown on rocky ground, this is the one who hears the word and immediately receives it with joy; 21yet such a person has no root, but endures only for a while, and when trouble or persecution arises on account of the word, that person immediately falls away. (Matthew13:20-21)

Jesus used this part of the parable to caution us about the rough realities of shallow faith.  Shallow faith is faith without deep roots.  Shallow faith is exuberant at first, like the new plant sprouting from the ground shortly after planting.  And if we aren’t careful, we’ll focus on that exuberance.  We’ll even use that exuberance as the standard for judging moral vitality and maturity.  How many times have you heard it said that new believers should be “put to work” in the church?

And Jesus makes it clear that people with shallow faith—faith planted in rocky ground in the words of the parable—aren’t people with “staying faith.”  They have a “fair weather” kind of morality.  They like the good news of God’s grace but don’t have roots deep enough in God’s truth to survive the trouble that always comes from living out God’s grace and truth.

And because they don’t have deep rooted faith in God’s truth, people with shallow faith don’t mature into fruitful living for God.  They don’t have faith enough to stand firm when the rough realities of rejection, rejection, persecution, and other trouble arise to oppose God’s grace and truth.

Marriage ceremonies always celebrate the love shared by the couple getting married.  But the wise among us know that marriage is more than a wedding.  Marriage is about weathering trouble that arises only because of marriage.  The troubles of marriage test the depth of a couple’s love for each other.

The same is true for people who are morally and ethically fruitful, and for religious societies, fellowship, congregations, and other entities that hope to be morally and ethically fruitful.  Fruitful people and organizations aren’t made up of people with shallow faith.  They aren’t led and don’t thrive because of fresh-faced exuberance.  Fruitful people have battle scars earned in following Jesus.  They’ve lost friendships, jobs, popularity, and in other ways because of God’s grace and truth.  They’ve been lied on, talked about, shunned, misunderstood, and abused.  This didn’t happen simply as part of the usual trouble we see in life.  It happened because they took a stand for divine grace and truth and took the heat for it.

The good news is that we don’t have to have shallow faith.  Shallow faith isn’t an accident.  It’s a choice we make or refuse to make.  It’s a faith that we either praise or question.  Jesus questioned shallow faith at every turn.  He understood the big difference between a fresh sprout and a fruit-bearing plant.

One of the moral realities Martin Luther King, Jr. and the Southern Christian Leadership Conference had to face and get their followers to embrace was God’s grace and truth is stronger than all evil.  And because their faith was rooted so deeply, jail cells and fire hoses and police dogs couldn’t turn them around.  They took the heat.  They went to jail.  They kept fighting for justice even when their houses were firebombed, their families were threatened, and they didn’t know where the next dollar would come from.

Like they did, you and I are called to sink our faith deeply in God’s grace and truth.  Shallow faith isn’t what we need today.  God’s calling on people with deep rooted faith that can survive the rough realities.  God has promised to be with us in those rough realities.  God has promised to sustain us through them.  The good news is that God calls us to a relationship with God that is trouble-proof, not trouble free.

Early during the Christian movement Peter was opposed, arrested, and even beaten by religious authorities because he was leading a movement based on God’s grace and truth as revealed in Jesus Christ.  His accusers wanted to kill Peter, but they were talked out of that by a fellow named Gamaliel.  So Peter and other leaders of the young movement were flogged and ordered to stop talking about Jesus.  This is how Luke describes how Peter and the others responded after being treated that way.  As they left the council, they rejoiced that they were considered worthy to suffer dishonor for the sake of the name [of Jesus]. And every day in the temple and at home they did not cease to teach and proclaim Jesus as the Messiah (Acts 5:41-42)

Let the troubles come.  God is with us.  Let hardships come.  And when they come—and they will certainly come—let it be said that we were like them and so many other people who had deep faith, strong faith, and faith that refused to shrink.  Amen. 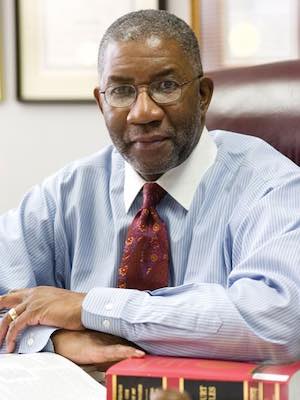 Pastor at New Millennium Church in Little Rock, Arkansas, a state court trial judge, a trustee of the Samuel DeWitt Proctor Conference, author of one book and three blogs, and a consultant on cultural competency and inclusion.