The day was Tuesday, August 23, 2011.  The time, 1:51 pm.  I was at Farmville Baptist Church with a group of ministers in a meeting.  All of a sudden, I felt the floor of the building bounce up and down, my first thought was that a big logging 18-wheeler was just rolling through.  But the bouncing and the shaking continued, until everyone in the room realized that we were feeling the effects of an earthquake.  Indeed, an earthquake of 5.8 magnitude occurred near Mineral, Virginia.  An estimated one-third of the U.S. population experienced the fearful power of that quake, and its tremors were felt as far south as Atlanta, as far north as Quebec, as far west as Illinois, and as far east as New Brunswick.  The quake damaged the high school in Louisa, and even now, two years later, they have just broken ground to build a new one.  It also damaged the Washington Monument and the Washington Cathedral.  Other damage was reported as far north as New York City.[1]

Incidents like the Louisa earthquake remind us that we human beings live a very shaky existence.  From the perspective of all recorded time, human civilization is a mere blip in the saga of history, and human lives are mere vapors in the wind.  In our short lifetimes, we have experienced events that have shaken us to the very core of our being.  Despite our technology and our increasing dominion of nature, every now and then we are reminded of just how powerless we really are.  We live a very shaky existence.

As we continue our sermon series in the book of Hebrews, we see that the writer of Hebrews also understood that we live a very shaky existence.  He was writing to a community of first-generation Christians of Jewish background who were being persecuted to the point that some of them were thinking about renouncing their faith.  This writer was exhorting these Christ followers to continue to have faith in God, their sure foundation, even though it was hard to see how it was all going to end.  Those early Christians were told that trusting in God was not a short-distance sprint, but a marathon that required perseverance to press on toward the goal of Jesus Christ, the pioneer and perfecter of their faith.  Today, we come to a passage that reminds Christians that though the world may shake, we serve an unshakeable kingdom.

This passage from Hebrews 12 begins with a retelling of how God gave the Ten Commandments to Moses and the Israelites at Mount Sinai.  When we think about the giving of the Ten Commandments, we often have a picture of Moses coming down carrying the tablets with everybody happily waiting to receive them at the foot of the mountain.  But that’s not what happened.  Mount Sinai was a terrifying place of fire and smoke, darkness and gloom.  It reminds me of Mount Doom in The Lord of the Rings movies.  There was a lot of shakin’ going on there—the whole mountain shook, and Moses himself trembled with fear.  We have a picture of a holy and untamable God, a dangerous deity not to be trifled with.

I must confess that I’m uncomfortable with such a picture of God.  Perhaps I am overreacting against those who use scare tactics to emotionally coerce people to become Christians.  Perhaps I fall under a modern mindset that sees God mainly in a therapeutic light, a warm-fuzzy God of comfort, love and grace.  Biblical scholar Ellen Davis notes that upholding fear “as a healthy and necessary disposition toward God” represents for many modern readers “one of the most offensive things in the Old Testament.” And yet, the Bible is full of admonitions to “fear God.”

For Davis, the fear of God is first and foremost, a proper gut response to God.  She writes: “Fear is the unmistakable feeling in our bodies, in our stomachs and our scalp, when we run up hard against the power of God.  From a biblical perspective, there is nothing neurotic about fearing God.  The neurotic thing is not to be afraid, or to be afraid of the wrong thing.”  Davis continues, “The time comes in every life–and more than once–when we are personally confronted with the power that spread out the heavens like a sequined veil, that formed us out of dust and blew breath into our lungs, that led Israel through the Red Sea on dry land and left Pharaoh’s whole army floating behind.  If we can experience that power close up and not be gripped in our guts by the disparity between God and ourselves, then we are in a profound state of spiritual slumber. ‘Fear of the Lord’ is the deeply sane recognition that we are not God.”[2]  This fear is a proper reverence and awe of God’s holiness and power.

At Mount Sinai, the awesome power of God was on full display, a power that shook loose the Hebrew slaves from the oppressive grip of Egypt, one of the most powerful kingdoms on earth at that time.   At Mount Sinai, the Lord displayed to the Israelites the fearful power that left Pharaoh and Moses quivering.  At Mount Sinai, the bright, uncrossable, dividing line between divinity and humanity was drawn with fire, darkness, gloom and storm.  The message of Mount Sinai was this: “Keep out!  This is the dwelling place of the one, powerful God; and you, mere creatures, are not God.”

How is that possible?  The next verse gives us the answer: we are welcomed by God because we have “Jesus the mediator of a new covenant, and to the sprinkled blood that speaks a better word than the blood of Abel.”  Here we see the supremacy of Jesus Christ.  Jesus is the true and better Moses who stands in the gap between God and human beings, and bridges and spans the gap between the two.  What about Abel?  You may remember that in Genesis 4, Cain killed his brother Abel, because Abel offered a sacrifice pleasing to God while Cain did not.  Abel’s blood cried out in revenge, but Jesus is the true and better Abel, who also was innocently slain, but whose blood now cries out, not for our condemnation but for our acquittal.[3]  Jesus Christ, the pioneer of our faith, was the perfect sacrifice that ended all sacrifices.  Jesus Christ, the perfecter of our faith, is the one who ushers us into the presence of God.

Now, I want to clearly state for the record that the God of Jesus Christ in the New Testament is the same as the God of Moses in the Old Testament.  It’s not about a loving God vs. a fear-inducing God.  God is still to be feared, but this reverence and awe of God’s power and holiness is located within a relationship of God’s love and grace.  According to Scott Bader-Saye, St. Thomas Aquinas called this a fear, a “filial fear” based on love and affection.  This filial fear presumes that we know God not as a threatening judge but as a loving parent. [4]

When I was about nine, I got into a heated argument with my sister Lisa, and I made her cry.  My Dad–whom I love, and who loves me–came into the room, and told me in a calm and firm way that I was going into timeout for thirty minutes, in the clothes closet.  I don’t know if it was something in his voice or in his look, but my dad put the fear of God in me that moment.  Without a word, I immediately walked into the cramped clothes closet and shut the door behind me.  My dad didn’t have to discipline me often; but when he did, I knew that I deserved it.  His loving discipline played a big part in forming who I am today.  As a teenager, I was more “fearful” of disappointing my dad than I was in disappointing my friends.  That helped me to withstand negative peer pressure and kept me on the right path growing up.

In the meantime, the empires of Egypt and Persia have come and gone.  In Acts, the opposition from powerful religious leaders was no match for the message of Christ.  The formal systems of apartheid and segregation, once so entrenched in South Africa and here in the States, have been shaken.  Yes, there is still more work to be done, but God will work through God’s people to continue to shake things down.  Though the world may shake, we serve an unshakeable kingdom.

The God of Jesus Christ who confronts and shakes all earthly principalities also confronts and shakes all the tiny little kingdoms that we try to create for ourselves.  In these kingdoms, we are tempted to place our faith in created things that just won’t last, things like good grades, a college degree, a lucrative and successful job, good health, material possessions, other people’s good opinion of us, successful children, you name it.  All of these are good things, but they all have a shaky existence.  That’s why Jesus said, “Seek first the Kingdom of God, and all these things will be added to you.”  Only God’s kingdom will last, with Jesus as our sure foundation.  Though the world may shake, we serve an unshakeable kingdom.

So this week, when things don’t go according to plan, remember, though the world may shake, we serve an unshakeable kingdom.

When you or a loved one gets a dire diagnosis, remember, though the world may shake, we serve an unshakeable kingdom.

When we face opposition for the cause of justice, remember, though the world may shake, we serve an unshakeable kingdom.

When classes and work seem overwhelming, remember, though the world may shake, we serve an unshakeable kingdom.

When you feel scared and anxious, remember, though the world may shake, we serve an unshakeable kingdom.

When you encounter resistance and opposition for doing the right thing, remember, though the world may shake, we serve an unshakeable kingdom.

May our Lord Jesus Christ be your unshakeable kingdom, now and always.  Amen.

[3] I’m indebted to Dr. Timothy Keller, Senior Pastor of Redeemer Presbyterian Church in New York City for these formulations of how Jesus is “the true and better” fulfillment of Moses and Abel. For the original talk by Dr. Keller, visit: http://theresurgence.com/r_r_2006_session_seven_audio_keller. 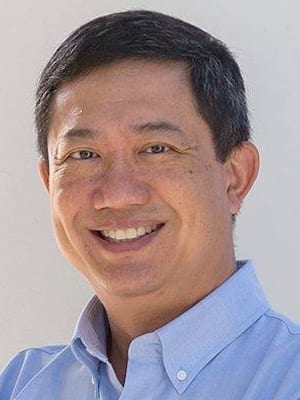 Leadership coach and church consultant at MichaelKCheuk.com. He is a Good Faith Media governing board member, who lives in Charlottesville, Virginia.