What a Preacher Learned When He Stopped Preaching

I barely made it through the Easter Sunday sermon. Through a severely hoarse voice, I did manage to croak out the affirmation that “Christ is risen, he is risen indeed.”
Like all preachers, I had been hoarse many times before. I figured it was nothing a few nights’ sleep and some allergy medicine wouldn’t cure.

But the hoarseness persisted. I called my doctor. She said to quit talking.

My voice worsened. I called my doctor back. She insisted I see a specialist – immediately.

When my ENT doctor walked through the door, we greeted each other. He looked up from his chart and said, “Reverend, this isn’t normal hoarseness. You have a problem.”

After filming my vocal cords, his suspicions were confirmed. He found a 4 mm lesion on my left vocal fold.

He scheduled surgery to excise the lesion and perform a biopsy on it.

He explained that he did not think it cancerous, but that he could not be certain until he put the tissues under a microscope.

He put me on total vocal rest. No preaching, teaching, talking, whispering (which is, curiously, more damaging to the vocal folds than speaking), or vocalizing of any kind. It would be the better part of a month before I would speak again.

“Jesus came preaching,” the New Testament reports, the one singular activity of our Lord I have abundantly emulated.

Any honest preacher could attest that his or her identity is inextricably tied to the voice, the audible speech, the uttered word. Simply put, a preacher talks.

What happens to the preacher if he or she is no longer able to speak?

Even in our postmodern day of declining church and clergy influence, the preacher is still provided the enormous privilege of an audience.

Society extends to us an astonishing platform, a generous forum, an almost open – and certainly excessive – invitation to speak.

I observed this deference as a boy, sensed even then its power and, for more than 30 years, have rarely demurred from claiming it.

I came by talking naturally. My father was a raconteur; everyone around him was drawn to his narrative feast.

The Johnson supper table was a whirligig of stories, anecdotes, opinions, assertions, declarations, not only from my father, but also from my three brothers.

Only my mother had the gift of reticence at table, but she could hold forth too when the din died down. Speech was shot like bullets, guns rarely holstered.

So, when the specialist told me he was going to cut on my throat, and test that cutting for cancer, I freaked. Who am I if speechless?

For the next month, I found out.

When EthicsDaily.com asked me to write a piece on what I am learning during this time of quietness, my first thought was to submit a blank page. But certain impressions from the involuntary silence keep surfacing.

Listening is important. Like most truth, this axiom is more rhetoric than real, more spoken than practiced.

Love is incarnated powerfully by active, engaged, vulnerable, durable listening. Carlyle Marney used to say that preachers likely would not talk very many into the Kingdom, but they just might listen a few in.

For the first week or so, it was so awkward for me to be quiet around others that I tended to stay isolated from human interaction beyond Jana and my family.

Not only would I miss being able to talk in these groups, but I also knew that the expectation on the part of others for me to speak would be too great a temptation for me to resist.

A pastor wrote to me: “When I’m quiet, I observe interaction that I never saw before because I was too busy trying to be witty. When I’m genuinely quiet, when I slip into the background, I’m shocked at what I see in my friends’ pain and struggle that I was blind to before. For the most part, all this is on their faces and in their words, the living human document. I didn’t notice because I was talking too much.”

The world goes on quite nicely without a sermon from me.

The notion of one person unilaterally giving most of the speech about God in the faith community is a bad one.

I have heard several powerful sermons this past month. Did St. Paul have preachers in mind when he said, “How will they hear without a preacher?”

Take care of your vocal cords. This is self-evident to those not as obtuse as me. Rest your voice. Drink the requisite eight glasses of water a day; proper hydration is as essential as it is rare.

Caffeine is a killer on those tissues, dries them out. Cut coffee intake, particularly on preaching days. In service to the sacrament of the Word, I plan to make coffee my Sabbath sacrifice.

Speech should not be gratuitous. Jesus taught his disciples in the Sermon on the Mount to employ an economy of words.

When speaking, half as much is twice as effective. “There is a time to be silent and a time to speak,” and I would like to learn better how to apportion the day among the two.

The lesion is benign. My vocal folds are healing. My voice is returning. My doctor says I can return to the pulpit soon.

We have a marvelous human facility in speech, a feature of God’s image within us.

The first thing we know about the Almighty in Scripture is that “God said,” and by that spoken announcement created a world. But the story says that God got quiet on the Sabbath.

For those of us who cannot, the question remains: When does the preacher’s voice take its rest?

CharlesFosterJohnson is pastor of First Baptist Church of Desdemona and Bread Fellowship of Fort Worth. He blogs at Connectivity. 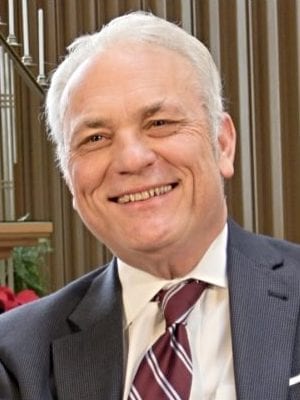 Charles Foster Johnson is pastor of Bread in Fort Worth, Texas, and founder and executive director of Pastors for Children, a nationwide network of faith leaders mobilized for public education ministry and advocacy.