What Baptists Don’t Understand About Being a Witness – Part 2

Christ calls us to be faithful witnesses and not successful proselytizers, as I explained previously.

If we are to be witnesses, instead of proselytizers, how should we relate to persons of other faiths?

Imagine we are among strangers who find ourselves deep in the earth in a vast cave system with no experienced guide to lead everyone out to the surface.

Suppose, then, that the group splits into smaller parties and follows separate passages to search for a way out of the darkness.

Furthermore, assume that our path winds round and round as it ascends, finally leading us to the light at the mouth of the cave.

Finally, consider that upon traveling back into the cave we come once again to the large cavern at the bottom, where we encounter travelers who claim that other, opposing pathways also lead to safety.

If this is the situation (realizing that no analogy is entirely perfect), how should we respond to these people who have gone a different way?

Many Christians suggest we should immediately label every other path as a dead-end, a deceptively attractive passage that ends disappointingly at a solid rock wall.

But many “cave explorers” in today’s postmodern world point out that we are in no position to pontificate about the nature of trails we ourselves have not walked.

Nonetheless, we surely can testify with passion about the path we have traveled.

According to the earliest testimony of the apostles Peter and John, as recorded in Acts 4, we who have met Christ “cannot keep from speaking about what we have seen and heard.”

This, in fact, is what it means to be a “witness” – to give an account of what we have seen and heard – rather than to discount and disparage the things we have not seen and not heard.

We can and must speak passionately about the light we have experienced, but we should not assume we know the mysteries of the whole cave system, for God’s ways are bigger than we can fathom.

Neither should we claim to understand the nature of every path we personally have never trod.

Indeed, many other religious “ways” have led their faithful followers to Light and to the Divine, and about those paths we should be curious and not caustic.

Why are so many people drawn to caves?

Many of them come seeking an adventure like they’ve never had before.

Adventure is an important theme in Christian theology that is suggested in this cave analogy. Life itself is adventurous, being marked by unpredictability and uncertainty.

Cave exploration requires a willingness to step into the unknown – to “walk by faith, not by sight” (2 Corinthians 5:7) – an apt metaphor for faith (Hebrews 11:1) and the very essence of religious pilgrimage (Hebrews 11:8).

Following a particular “way” whose “end” is hidden is risky behavior and not for the spiritually faint of heart.

One of the attractions of a cave is its multiple paths. These different passages demand that choices be made.

The Bible is familiar with multiple paths that beckon and call forth a response. People make decisions daily, and the choices they make have consequences that can influence the rest of their lives.

Not all paths necessarily lead where people would want to travel so they must be careful when they are choosing.

This cave analogy begins deep in the earth and suggests that the way of rescue is an upward trail.

Biblical writers conceive of God as living in the heavens, high above the earth. Jesus was carried up into heaven after his resurrection (Luke 24:51) and will come down from heaven in a similar way on the day of his second coming (Acts 1:11).

In one of Jesus’ famous stories, a rich man in Hades looks up to Paradise for help (Luke 16:23). The reference to ascending is clearly metaphorical, but traditional.

So, in the words of the ancient proverb, “For the wise the path of life leads upward, in order to avoid Sheol below” (Proverbs 15:24).

Darkness and light are rich, theological images that can stand alternately for death and life, sin and righteousness, evil and goodness, lies and truth.

In the illustration, the desired movement is from a dark to a lighted place. Salvation is found where the light is found.

In the Fourth Gospel, Jesus claims, “I am the light of the world. Whoever follows me will never walk in darkness but will have the light of life” (John 8:12).

As the lost searchers in the cave analogy approach the mouth of the cave, the light pours down the passageway toward them and they can see the source of their salvation.

They go around a corner and suddenly the dark crevices and foreboding spaces around them are illuminated by the wondrous light from the cave mouth.

Similarly, in the words of John, “The light shines in the darkness, and the darkness did not overcome it” (John 1:5).

Whenever persons come out of absolute darkness into the light, their eyes must adjust to the glaring brightness of the sun.

While they surely can see better than they did in the dark, their view is limited until they have been in the light long enough for their vision to clear.

Yet, there are Christians who – having “seen the light” – act as if they can “see” perfectly.

So, when these rescued ones turn back to the cave as rescuers, some of them will likely insist they know everything there is to know about the light, or that the light they have encountered is the only light to be found.

They may sincerely believe that if they don’t warn others and lead them to their path, those persons will be lost forever.

This evangelistic approach becomes complicated (and sometimes contentious), however, when people from other religious groups claim their ways lead to the light.

The analogy of the cave illustrates, then, that one’s understanding of “the light” may be blurred and incomplete (compare 1 Corinthians 13:12), so that one should approach others with humility rather than arrogance.

It also teaches that one cannot comment absolutely on the efficacy of a path one has never personally walked. We can only talk about the path we have followed.

Editor’s note: This article is the second in a three-part series. Part one is available here and part three here. 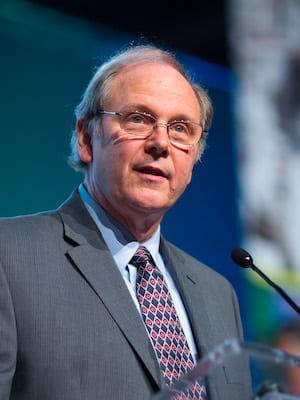 Professor of theology and missions emeritus from Logsdon Seminary, Hardin-Simmons University, and a past chair of the Board of Trustees of the Parliament of the World’s Religions.