What You Can Do to Stop Human Trafficking

Human trafficking is “the illegal and involuntary smuggling of a person across borders, often for the purposes of forced labor,” according to Julie Clawson in “Everyday Justice: The Global Impact of Our Daily Choices.”

Whether we choose to realize it or not, children are traded, sold and stolen in order to increase production for goods such as cocoa beans. And God hates this.

Researchers estimate there are more slaves in the world today then there were 400 years ago. Numbers are now reaching more than 27 million. The International Institute of Tropical Agriculture says about 284,000 of these 27 million are children working 12-hour shifts on cocoa farms with machetes and pesticides.

These children face arduous work, as cocoa pods must be cut from high branches with long-handled machetes, split open and their beans scooped out. It is unbelievable and unacceptable that, in the beginning of the 21st century, children are trapped in such desperation.

Local farmers, being taxed by the government, are forced to hire cheap labor to make ends meet. Farmers are desperate. They must hire cheap labor. This act results in children being trafficked into slavery.

In times like these one must turn to the Bible and ask, “What do you have to say about this, God?” Most people argue the Bible says very little about the eradication of slavery.

As most of you know, the New Testament can be read as literature that supports the issue of slavery. The most popular text is found in Philemon with Paul giving orders for a slave to return to his slave master. Jesus even uses parables that discuss kings and masters who own slaves. For the longest time, U.S. preachers in the South saw the Bible as the leading defense in the argument for slavery.

But I believe the prophet Amos sees it differently. Amos is an eighth-century prophet speaking to Israel about how they have fallen away from God’s ordered life. As a matter of fact, in Amos 2:6-7, Israel is condemned for the practice of human trafficking. Amos tells Israel:

This is what the LORD says:
“For three sins of Israel,
even for four, I will not turn back [my wrath].
They sell the righteous for silver,
and the needy for a pair of sandals.

They trample on the heads of the poor
as upon the dust of the ground
and deny justice to the oppressed.
Father and son use the same girl
and so profane my holy name.

Israel is selling off people for silver and practical goods. This is slave trade. They are selling the poor on the cheap. And God hates this. God is furious with those who trample their feet on the poor and who sell their children into slavery, and Amos goes as far to say that it profanes the holy name.

I agree with the old Southern pastors in that the Bible speaks about slavery, but I think it condemns it. Amos spends the majority of his time complaining about its heinous reality.

He says, “God will not turn back wrath, for Israel sells the righteous for silver, and the needy for a pair of sandals.” And guess who the needy are: the poor and the young.

This system is known today as latifundialization. The ruling elite in a community builds a system of debt slavery. They tax the family farmers and create a system in which farmers can never pay off their debts. They only way to become debt-free is either to sell your farm or sell your children. This system devalues the sanctity of human life.

But I know what you are thinking: “We see your point, but what do you want us to do?” The solution to unfair labor practices, human trafficking and shutting down the perpetuating cycle of slavery is fair trade.

Fair trade is a system of exchange that honors producers, communities, consumers and the environment. Fair-trade products are called “Fair Trade Certified.” This means that the price of the product attempts to cover the cost of production and a living wage in order to cover the basics of food, shelter, clothing, education and medical care for the farmers. Chocolate then is sold by members of the Fair Trade Federation.

In short, there is a whole world out there already in place to help you make conscious decisions about your chocolate purchases. You can help eradicate human trafficking by simply purchasing fair-trade chocolate. Google it.

So as a consumer and as a Christian, I am asking you to use your purchasing power to help the oppressed, bring good news to the poor and release the captives.

You don’t have to know you are oppressing to be oppressive.

J. Barrett Owen is the admissions associate at the McAfee School of Theology of Mercer University as well as the pastor of National Heights Baptist Church in Fayetteville, Ga. He enjoys sharing his life, hobbies and ministry with his beautiful fiancé. 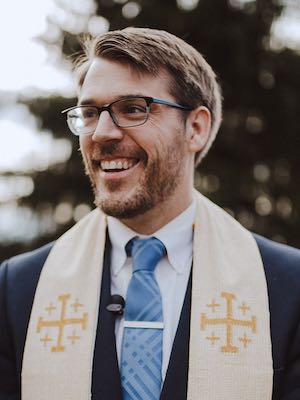 Senior pastor of First Baptist Waynesboro in Waynesboro, Virginia. He is a member of Good Faith Media’s strategic advisory board.