What to Do When Your Sunday School Teacher is Arrested 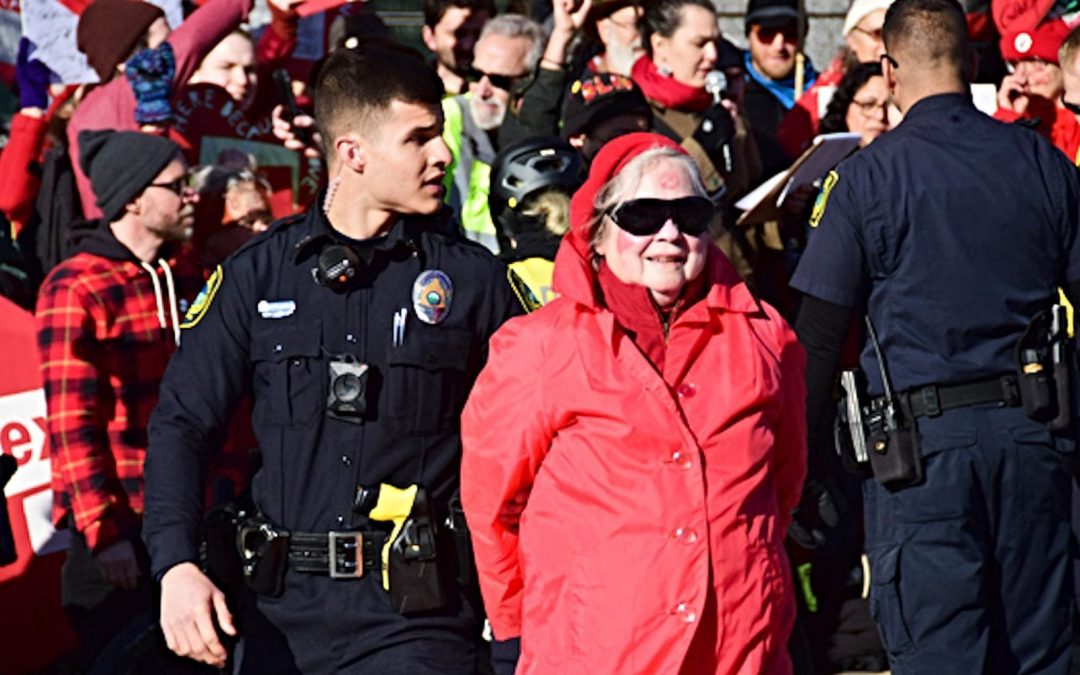 What should you do when your grandchild’s Sunday school teacher is arrested?

It’s not what you think. (The arrest.) Nothing salacious or seedy here.

My friend BJ was handcuffed for committing an act of civil disobedience to call attention to our worsening climate crisis.

She’s an 80-year-old retired elementary school teacher, who is mild mannered and host of one of our congregation’s two ongoing weeknight Bible study groups focused on the Sermon on the Mount.

She is the widow of a Presbyterian minister and a Sunday school teacher for our preschoolers – not to mention a source of constant encouragement to me personally.

The march gathered in front of the National Center for Environmental Information (NCEI) in Asheville, North Carolina, which archives and monitors global climate data for the federal government.

It was organized by the local chapter of Extinction Rebellion, an international movement now active in 56 countries.

In all, nine of our members took part in the protest (from the Latin, “publicly witness”), with three members among the 16 arrested.

The Valentine’s Day theme of love and support for climate scientists is amazingly appropriate.

In the first two years of our current administration, more than 1,600 scientists have left their federal posts.

Twenty percent of high-level appointee positions are vacant. Some 700 scientists have left the Environmental Protection Agency.

Though rooted in stories of undue suffering by an early Christian saint, Valentine’s Day is now reserved for arousing romance, expressed in mawkish sentiment and marketed in all manner of sugar and cocoa products.

Chubby cherubs shooting arrows of love at the heart were once again featured on flirty cards professing affection in the week leading up to last Friday’s observance. Fine dining reservations were hard to get that evening.

Tons of candy went on sale the next day. This season’s romance is flighty. It’s more fling than vow. The calories are empty.

The confusion of “heart” and “romance” in modern usage is a sign of our spiritual affliction and relational crisis.

For us, the heart represents moodiness, volatile attention, impulsive emotion – parallel to the biological effect of sugar highs followed by lethargy and indifference.

In the pietist-revivalist tradition of my rearing, “giving your heart to Jesus” was often associated with intense emotion. The fickle results require equal emphasis on “rededicating your life to the Lord” as part of the hymn of invitation appeal.

In Scripture, though, the heart is the steady organ of the human body, and decisions made there are life-determining. The heart is the location of sturdy conviction and strenuous choice.

Decisions made in the heart shape all other arrangements and warrant endurance in the face of conflict.

In Hebrew thinking, the heart represented the deepest level of a human personality, representing the true picture of the person.

The Latin word “credo,” from which we get the word “creed,” comes from two words that together mean “I give my heart to.”

The psalmist sings, “It is well with those who deal generously and lend, who conduct their affairs with justice … Their hearts are steady, they will not be afraid” (Psalm 112:5-9).

In Matthew, Jesus makes this striking claim: “Where your treasure is, there will your heart be also” (Matthew 6:21).

The Acts of the Apostles reports, “Now the company of those who believed were of one heart and soul, and no one said that any of the things which they possessed were their own, but they had everything in common” (Acts 4:32).

And do you recall Zacchaeus’ “confession of faith in Jesus Christ as his personal lord and savior”? “Here and now I give half of my possessions to the poor, and if I have cheated anybody out of anything, I will pay back four times the amount” (Luke 19:8).

The heart is not the seat of fantasy. It is where questions of trust and allegiance and power are negotiated and sealed.

The heart is where bet-your-assets decisions are settled – in particular, the kind that will get you in trouble with the world.

No doubt there are innumerable ways, among a myriad of circumstances, to do justice, to love mercy and to walk humbly in the Way of Jesus.

Holy obedience comes in many forms. One of them might include civil disobedience. And handcuffs.

Author’s note: Photos from the Extinction Rebellion march in Asheville are available here. A 20-minute video of the march can be viewed here.

Curator of prayerandpolitiks.org, an online journal at the intersection of spiritual formation and prophetic action. He was the founding co-pastor of Circle of Mercy Congregation in Asheville, North Carolina.